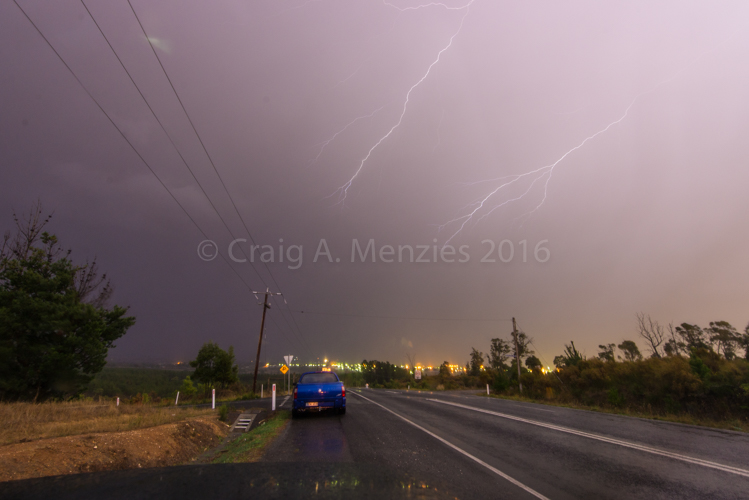 I took the opportunity of the first decent storm in months to get out and take a few shots of lightning. It’s my first attempt at getting out and shooting in a storm, in particular chasing the Lightning Shots. Also given it was midnight, things were a bit smash and grab as far as gear and location. I grabbed the D600 with the 50mm F1.4 & the Nikon 14-24mm F2.8. I also grabbed a hand release and my MIOPS Trigger hoping I might get a chance to use it for the first time with Lightning too.

So off I drove to the closest vantage point I thought was high but with plenty of other choices for Lightning to strike other than myself! As it turns out, where I parked on the side of the road happened to be unfortunate orientation: over the course of the storm most of the lightning was to the sides of me. However I managed to get 1 out of the 30 shots that worked for me. But to be fair it was my first attempt at this subject matter.

I thought I was stuck not being able to use my MIOPS as I thought I’d not bought the extra cable for the connection for the D600 (it’s different than the D810). As it turned out later when I got back home I realised that the remote release I had been using had a detachable cord with the right connection! Anyway, lesson learned for next time: spend more time with some gear in relaxed conditions. Still shooting in Bulb mode, with the remote release I felt I started to have a good feel for the right way to shoot it near the end of 30 odd shots. I’m looking forward to the next Storm when I will be more prepared.